Seizures due to lack of lubrication

What happens if the piston, piston rings and running surface of the cylinder liner rub against each other without any lubrication? What causes seizure on parts of the piston skirt? Why is it absolutely essential for the air baffles of air-cooled engines to be installed professionally? What happens if the engine is run with an over-rich mixture and what are the consequences of combustion faults? You can find out here.

Seizures due to lack of lubrication can occur generally, i.e. even if there is sufficient clearance between the cylinder and the piston. In the process the oil film breaks down (often only locally) because of the high temperatures or because of fuel flooding. In these areas, the surfaces of the piston, piston rings and cylinder running surface then rub against each other without any lubrication, which soon causes seizure with a severely worn surface.

A similar situation arises if there is an insufficient lubricating film between the piston and the cylinder due to a lack of oil.

If the oil film is destroyed altogether:

If there is a lack of oil:

Identical to those described above, apart from the discolouration of the surface. The surface of the seizure areas has an almost pure metallic finish, with no dark discolouration. As the lack of oil affects the entire surface of the cylinder, there are often seizure marks on both the pressure side and the anti-thrust side in the piston, in many cases even in the early stages.

There was an acute lack of lubricant between the piston and the cylinder bore. The fact that the surface of the seizure areas has an almost pure metallic finish indicates that the oil film was present but significantly weakened at the time of the seizure. Due to the limited extent of the damage, this concerns a temporary lack of oil or the early stages of damage. The damage would have been even more severe if engine had been operated further.

With this type of seizure due to lack of lubrication, the damage area is always located in the area of the piston skirt where the normal wear pattern would have formed on an undamaged piston after running in.

This is a typical example of seizure due to lack of lubrication. It usually occurs on the pressure side and is less common on the anti-thrust side. This damage is caused when the lubricating film breaks down on only one half of the cylinder. It is caused either by a lack of lubrication within a locally confined area or by the affected side of the cylinder overheating. Lack of clearance can be excluded as the potential cause here as, despite the severity of the seizure marks, there are no wear marks on the opposing counter-side.

Unburned fuel has condensed at the cylinder running surface and diluted or washed off the load-bearing oil film. As a result, the interacting sliding parts (piston and cylinder bore) run dry against each other, which results in long, narrow friction marks. The piston ring zone usually remains undamaged.

In the case of damage caused by unburned fuel, the damage occurs at the load-bearing areas on the piston skirt. These are the points at which the normal wear pattern would have formed on an undamaged piston.

Due to a fault on the injection nozzle, non-atomised fuel was able to reach the cylinder wall, where it weakened the oil film to the point where the piston was running dry without any lubrication at all. As a result, the piston top land seized so severely that it was temporarily welded to the cylinder wall. This caused chunks to be torn from the piston head.

This type of damage primarily occurs during the running-in phase under heavy loads, when the piston rings are not yet run in and hence do not yet provide a full seal (mostly on diesel pistons). The combustion gases streaming past the piston rings heat up the rings and the cylinder wall excessively and cause the oil film to break down.

However, abnormal combustion and increased temperatures or insufficient cooling of the piston and cylinder wall can also affect or even destroy the lubricating film. Initially this causes the piston rings to run dry without lubrication, causing burn spots. The piston also has to slide over the non-lubricated parts of the cylinder, which causes initial rubbing marks on the piston top land and subsequently leads to seizures on the entire piston skirt (Fig. 4). 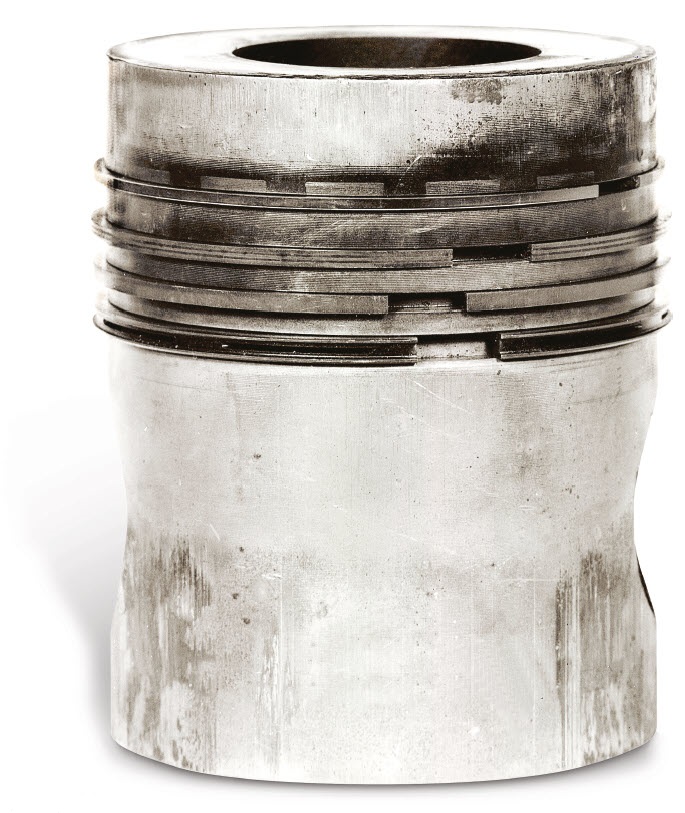 Seizure due to insufficient clearance on the piston skirt

What do we mean when we talk about seizure caused by a lack of clearance? What causes dry running between the pistons and the cylinders? What causes seizure on parts of the piston skirt? Why is the...