Black smoke is escaping from the exhaust, the car has less power and is running in limp home function: These are the possible consequences if the air mass sensor (LMS) is sending incorrect signals. What are the causes? How does an air mass sensor work? What is on-board diagnostics (OBD)? What are possible diagnostic trouble codes? How can you test analogue air mass sensors? You will find answers to these questions and a wealth of additional information on air mass sensors in this article.

The complete air mass sensor consists of a flow passage (tube), in which the intake air flows past the sensor unit itself.

NOTE:
Depending on application and vehicle, the air mass sensor is available as a single plug-in module, or fully integrated min a plastic tube. Both versions – with or without tube – are referred to as air mass sensors.

Older models have a hot-wire sensor element. Any contaminations on the hot-wire are burnt off by briefly heating it up after switching off the engine.

Newer models work with a film-like heating resistor on a mount. There is no burning-off process here. This hot-film sensor is heated to a constant temperature of approx. 120 – 180 °C above the intake air
temperature (depending on vehicle manufacturer).

The air cools the hot-film sensor as it flows in. The control electronics counter- balance this cooling by means of a heating current. This heating current is the measurement for the inflowing air mass. This method takes account of the density of the inflowing air. Pulsations and return flows can also be detected in newer designs with two separate measurement bridges.

This can lead to:

Leakages in the intake air system can allow dirt particles to enter with the intake air. These then hit the air mass sensor at high speed and destroy the delicate sensor element.

There are plenty of other factors that can cause an undamaged air mass sensor to provide incorrect signals:

Not every fault detected by the OBD leads directly to a malfunction indicator lamp illuminating. If a fault is detected in a driving cycle that influences the exhaust gas, it is saved as a “non-debounced” fault, meaning that the malfunction indicator lamp does not illuminate. The lamp only illuminates when the same fault occurs again during the next drive cycle or within a certain period. The fault is then designated as “debounced” (confirmed) and is saved as an OBD fault. Alongside the fault itself, other operating data and environmental conditions from the time of the fault are also collected and saved (“freeze frames”). The malfunction indicator lamp can go out again if the fault does not reoccur within a certain period. The data can be accessed using an engine tester or scan tool via the diagnostic socket in the vehicle:

Even if the OBD indicates a sporadic fault on the air mass sensor, it does not necessarily mean that the sensor is defective. Moisture, oil mist or dirt often falsify the measuring results, which the OBD then interprets as an error. These sporadic faults can be caused by the aforementioned factors. For this reason, it is advisable to check these before fitting a new air mass sensor.

When diagnosing faults, begin by reading the diagnostic trouble code with an engine tester or scan tool.

Although the OBD can detect a faulty part or function, it cannot determine the cause. Electrical faults in the wiring harness or in the component itself are usually saved as faults. They must be investigated using suitable test devices.

There are various ways to inspect the air mass sensor:

The following voltages must be present (see plug assignment diagram):

If these values are not reached, all affected lines and plugs must be checked for short circuits, interruption and transition resistances.

A voltmeter or oscilloscope can also be used for inspection.

If there is no special testing cable available, connect a measuring instrument with appropriate measuring tips to the terminals (rear side of plug).
Do not puncture the cables!

If a value of 1 volt is achieved, blow gently into the air mass sensor. The voltage value should now rise with the force at which you are blowing. If this does not happen, the sensor is defective and must be replaced.

The air mass sensor delivers a measurable voltage of around 1.0 to 4.4 volts between idling and full load. Replace the sensor if this does not happen.

Do not connect or disconnect any plug-in connections when the ignition is turned on. The peak stresses that arise as a result can destroy the electronic components.

Never use compressed air to blow out the air mass sensor This may destroy the sensor. 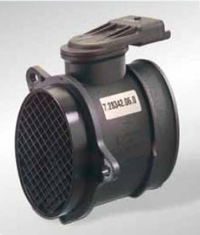