Irregular idling? Is the engine jerking when starting up the vehicle or when driving? Lack of power? Dirty EGR valve? Diagnostic trouble code P0102, P0103, P0401 or P0402 in the fault code memory?
The problem may be in the EGR system.
We explain possible causes and how to remedy them.

The most common cause for malfunctions in the EGR system are stuck or carbonised EGR valves. Besides gaseous pollutants, recirculated exhaust gas also contains soot particulates, in particular in the case of diesel vehicles.
Due to oil in the intake air, carbon deposits or carbon fouling are caused which eventually the force of the valve can no longer cope with ñ the EGR valve can then no longer open, or it remains in its open position. This results in jerking, irregular idling or insuffi cient engine power.

The causes of a high portion of oil in the intake or charge air may be malfunctions in the crankcase ventilation, worn bearings, a clogged oil return line on the turbocharger, worn valve stem seals or guides, the use of unsuitable engine oil qualities or an excessive engine oil level.
Exceptionnally intense deposits may also be caused by faults in the injection system.

Though EGR valves are designed for the high temperatures in the exhaust branch system, heat damage to the valve may occasionally occur. Such damage can be caused by incorrect actuation, excessively high exhaust gas back pressure or a blow-off valve ("waste-gate valve") of the turbocharger which does not open. There may even be some manipulation ("tuning") to increase the boost pressure.

On pneumatic EGR valves, one potential cause of malfunctions can be found in the entire section of vacuum control (vacuum pump, vacuum lines, solenoid valves).

Electric EGR valves and solenoid valves can mostly be actuated by way of an actuator diagnosis by the engine tester. The switching of a functioning valve can easily be heard when the engine is at a standstill.

Whenever a new EGR valve is installed after a defect, and the vehicle behaves as if the valve had not have been replaced at all, the map data required for operation must fi rst be "re-learnt".
This is achieved either in the course of a longer test drive or by using a specifi c program option in the engine tester, e.g. "Basic settings".

We strongly advise against cleaning the EGR components! If a component really is already defective, no
improvement will be achieved by cleaning it. And if functioning components are treated in this way, they may be damaged as a result of cleaning.
A defective component should always be replaced by a new one.

Since EGR valves do not soot themselves, it is essential to search for the causes of soot formation.

Salt and dirt may damage the sensor of an air mass sensor – they will at least falsify the measurements, which in turn could aff ect exhaust gas recirculation.

Whether dealing with pneumatic EGR valves or an electro-pneumatic pressure transducer, as in this case: The function can easily be tested using a vacuum hand pump.

Increasing importance of the oscilloscope 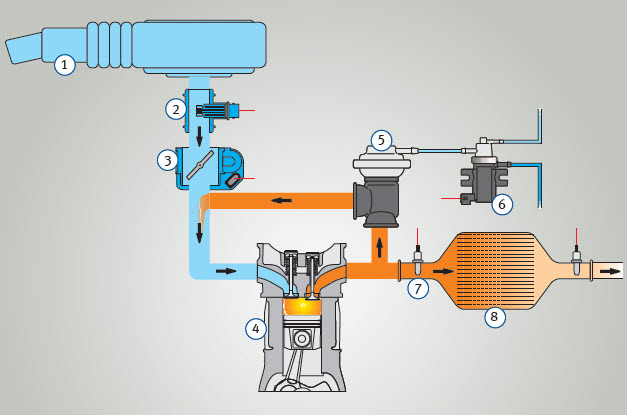