Damage to engine bearings due to the influence of particles

What happens when foreign bodies enter the plain bearing? When does the bearing have to be replaced? And what do you need to remember when mounting the bearing? A description of possible causes of engine bearing damage due to particle impact and how you should proceed is available here.

When foreign particles find their way into the lubrication gap between the bearing and the shaft journal, there is a great risk of bearing damage. Due to the very low thickness of the lubricating film, even small particles may disrupt operation and cause mixed friction. They may become embedded in the sliding layer and therefore made "harmless". The edges created in the process are flattened during contact with the shaft. Particles which are larger than the thickness of the sliding layer cannot be completely embedded. The protruding part causes wear of the shaft journal in the form of grooves. Strongly pronounced grooves lower the expected service life and may promote bearing seizure. Even during production or reconditioning of an engine, particles can enter the engine block and become stuck. This may be the case, for example, during the sand or glass blasting of an engine block. Dirt particles may also "arise" during operation, however (for example, soot or carbon), or be introduced.

To gain an insight into where the particles have come from, it may be useful to analyse the bearing and a sample of the oil.

Generally, despite scoring or embedded particles, bearings can still be used. This depends on the extent of the damage, however. If, for example, there are numerous large indents from particles with initial marks of mixed friction due to material accumulation, it is advisable to replace the bearing. Fine particle indents do not impair the function of the bearing. In both cases, the cause should be clarified in any case:

Particles which find their way into the lubricant gap and are not embedded into the bearing material are repeatedly forced through the gap, causing grooves in the process. Depending on the thickness of the edges created, these cannot be flattened during further operation and, due to increased mixed friction, there is an increase in temperature in the event of shaft contact. This often leads to initial rubbing marks and seizure.
The scoring may also be the result of the influence of mixed friction. Here, the grooves are fine and formed on the surface, however, and appear at both interacting sliding parts.

Particles which find their way into the lubricant gap may become embedded in the bearing material. Depending on the thickness of the sliding layer, we can differentiate between deep and shallow embedding. In the case of deep embedding, the particles are completely integrated into the sliding layer. This is only possible when the particle is smaller than the thickness of the layer. The material accumulation created during the embedding is flattened during the subsequent contact with the shaft due to wear. Shallow embedding takes place when the size of the particle is greater than the thickness of the layer. The particles are not completely embedded and protrude from the bearing surface. They cause wear and scoring on the journal surface. Due to the material accumulations at the edges or protrusions from particles which are not completely embedded, the formation of the lubricant film is disrupted, and mixed friction conditions may be created. So-called "wire-wool" wear is a possible consequence. Here the embedded particles cut into the surface of the shaft and remove material (chipping wool). The particles that break away, which are then embedded again, accelerate the bearing damage, and often complete failure of the journal and bearing cannot be avoided. Initial rubbing marks and seizure can therefore result from particle embedding.

Very large and hard particles which find their way into the lubricant gap cannot become embedded in the bearing material. They are forced through the lubricating gap, but then always become stuck again. Frequently, the pattern appears from oil grooves or oil bores as the particles were introduced here. Pronounced material accumulation along the progression track causes initial rubbing marks and seizure.

If there are pronounced areas of material accumulation along the progression track, or signs of an initial rubbing mark, the bearing must be replaced. The bearings can still be used, however, if the material accumulations have been flattened and there is no longer the risk of the influence of particles.

Foreign particles on bearing back

Whether the bearing can still be used depends on the progress of the wear of the sliding layer. As soon as initial rubbing marks or signs of material fatigue such as cracks or nicks in the area of the pressure
point occur, the bearing should be replaced, otherwise there is the threat of complete failure. Broken-off material can cause consequential damage in the same or an adjacent bearing. 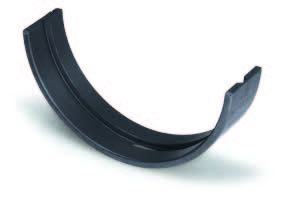 New systems require new technologies – the introduction of start-stop systems has placed new demands on engine bearings. The use of a polymer coating, for example, can reduce friction and increase wear... 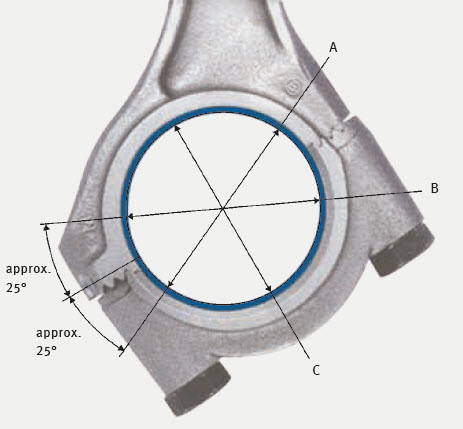 When installing engine bearings, instructions should be followed precisely. Checking the dimensions and tolerances is after all particularly important for mounting. We provide an overview of which...