Differential pressure sensors for the aftermarket 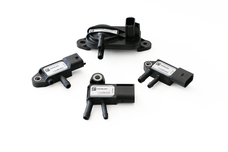 Whereas some differential pressure sensors from vehicle manufacturers are only available as complete modules, i.e. together with other components such as hoses or brackets, Motorservice enables users to purchase these sensors as individual components. The advantage of this is that you don’t have to replace the entire module if it fails, which is better for the environment and more economical.

What are they used for
Differential pressure sensors are most commonly used to determine how soiled the diesel particulate filter is. It can also be used to detect whether e.g. air filters or the EGR cooler are clogged or blocked. To do this, the sensor normally measures the pressure difference downstream and upstream of the component – and thus the loss of pressure that it causes. Sometimes (although rarely) the pressure difference to the ambient pressure is also measured.Due to stricter exhaust gas regulations, differential pressure sensors are increasingly being fitted to petrol particulate filters in petrol vehicles, as well.

The sensor consists of two chambers, which are separated by a piezo element. This element reacts when there is a change in pressure and converts the pressure difference into electrically measurable values. If the sensor is faulty, then it is not possible to determine how soiled the particulate filter is, for example. This can result in the filter not being able to regenerate and subsequently suffering irreversible damage. In the worst case, this can not only lead to loss of power and the costly replacement of the particulate filter, but also result in damage to other components in the exhaust tract.


Of course, we will always respect the do-not-track (DNT) setting in your browser. In this case, no tracking cookies are set and no tracking functions are loaded.